In late 1911 Donato Minicola decided it was time to try his hand at running his own business. He had many years experience going back to at least 1893 working in the fruit and grocery business with his father and brothers. The following appeared in the Peterborough Examiner in December, 1911:

Formerly with N. Minicola will open up a new Fruit & Grocery store on Saturday at 410 1/2 George Street. See further announcements.

Note that Donato was also known as Thomas. The grocery store officially opened on Saturday, December 9th, 1911. The Peterborough Morning Times described the new store in the following article on December 11th, 1911:

A new and up-to-date fruit and grocery business has been started at 410 1/2 George street, under the ownership of D. M. Minicola, formerly with N. Minicola. The store which is next to the Crystal, has been freshly painted and decorated and presents a fine appearance. Mr. Minicola intends to carry a fine assorted stock of foreign and domestic fruits, also a first-class line of groceries. The windows at present are filled with all kinds of Christmas fruits, candies and nuts.

Above: Early photograph of the store at 410 1/2 George, approximately 1915: Donato Minicola behind the counter serving a customer.

The following announcements and advertisements appeared in various Peterborough newspapers starting in December, 1911. Click for a larger view. 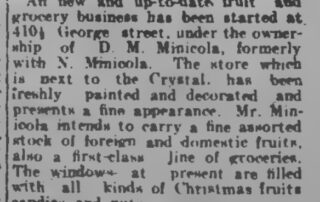 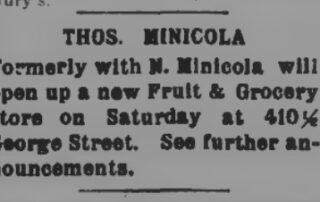 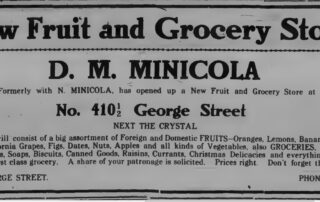 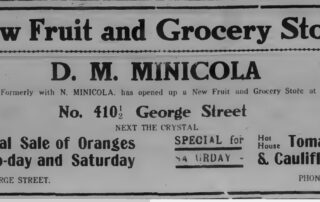 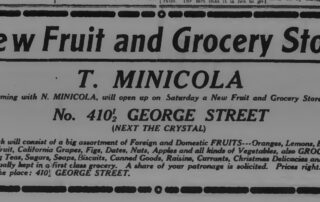 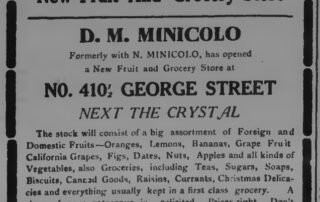 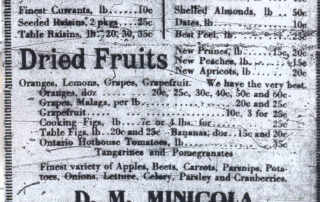 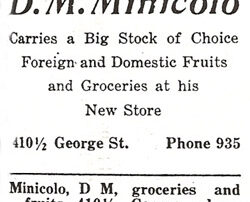 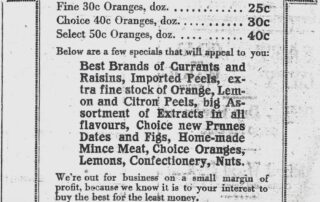 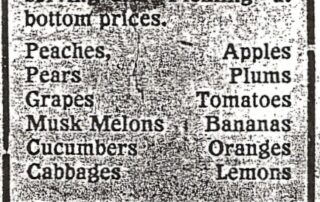 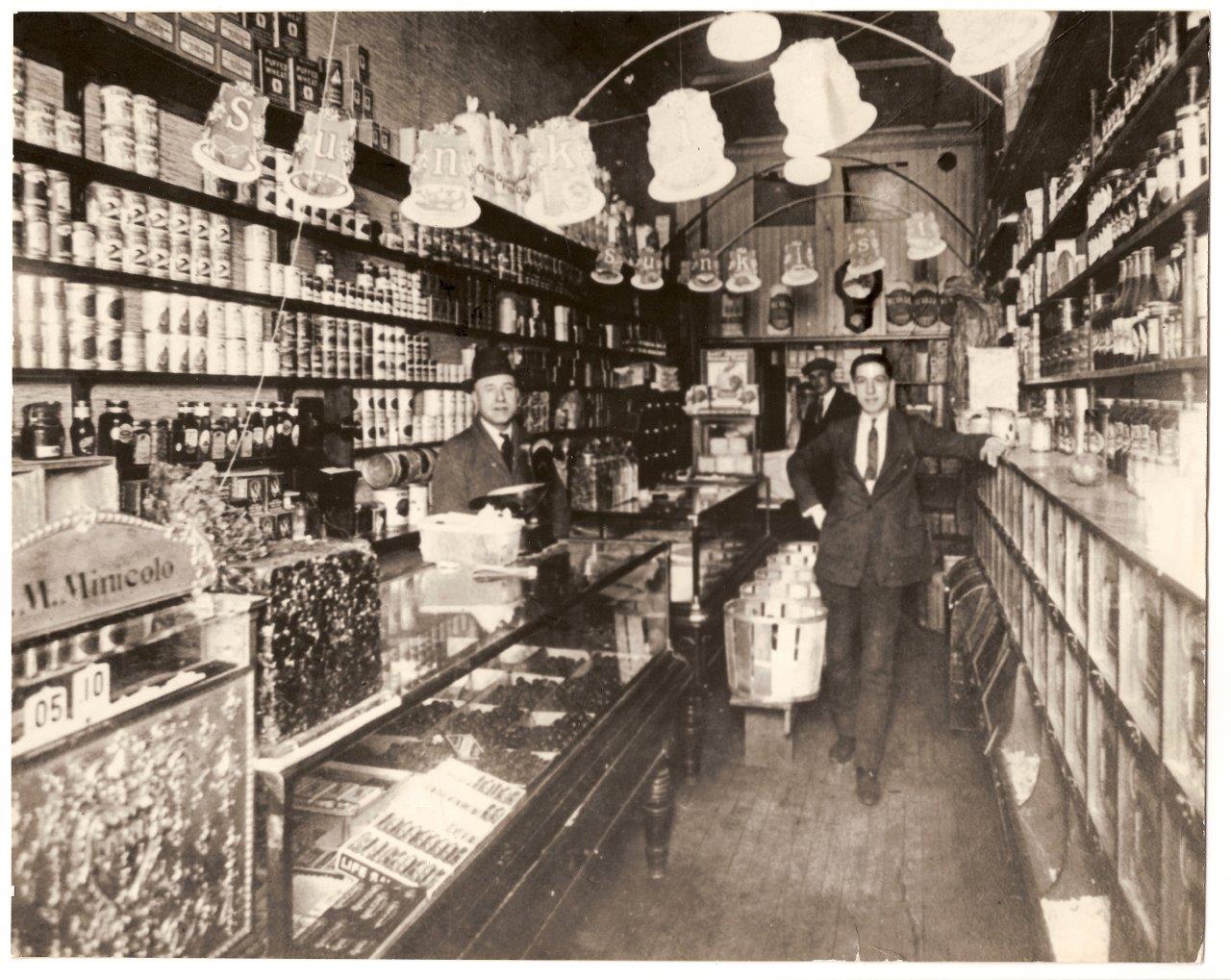 Above: Minicola Store at 410 1/2 George St. Circa approximately 1925-1930. Donato Minicola on the left and son Fred Minicola on the right. Unknown person at the back of the store. 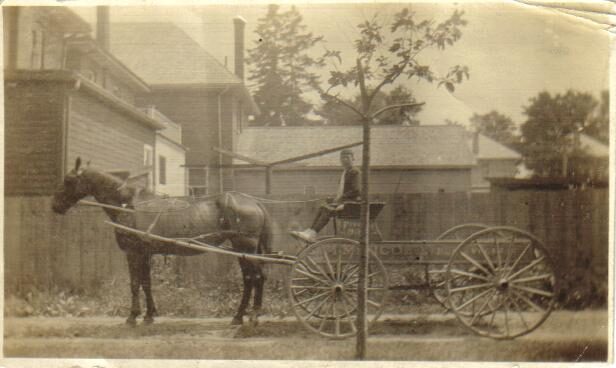 Above: Minicolo delivery wagon. If you look closely you can read the name Minicolo painted on the side of the wagon. According to Anna Kouri “Daisy the delivery horse who always knew when it was quitting time.” The setting is almost certainly the lane way at the south side of the property at Donato & Adelina Minicola’s home at 175 Lock Street. The houses to the left would be the back of the homes on the west side of Lock Street looking south. The two houses on the right would be on the north side of Lansdowne just west of Lock Street. Note: the last name was variously spelled Minicola or Minicolo at this time.

Closure of the George Street store: Donato being a very generous person and a good Catholic frequently extended credit to his customers. By late 1929 and early 1930 the Great Depression likely started having an impact on people being able to pay their bills and yet there were others who simply refused to pay the money they owed him. Family history suggests this eventually led to him having to close the store some time in 1930. The 1930 Peterborough City Directory lists B. R. Strano Wholesale Fruit at 410 1/2 George St.

By 1932 the City Directory lists Minicola Wholesale Fruit at 175 Lock Street which was also the family residence at the time. Both Donato and Vic Minicola are listed as working at the business. The family home at 175 Lock Street was on a large piece of property with several outbuildings. There would have been ample space to run a wholesale business from this location.

By 1933 Donato had reestablished a storefront at 294 Charlotte Street. Both Donato and Vic are listed as working at the new store. The following appeared in the 1933 Peterborough City Directory:

Tragedy strikes: On Christmas Eve of 1934 Donato collapsed as he was working in the store. He passed away two days later on December 26th, 1934.

Right: News of Donato’s sudden passing made the front page of the Peterborough Examiner on December 26th, 1934

After Donato’s passing his sons carried on as best they could. The 1935 City Directory shows the business has moved to a different address on Charlotte Street. Vic Minicola is listed as the manager and younger brother Alfred is now listed as a clerk at the store:

After 1936 the business is closed and is no longer listed in the City Directory. By 1937 Vic Minicola is listed as a machinist at the Outboard Marine factory where he would work until his retirement in the mid 1970’s. 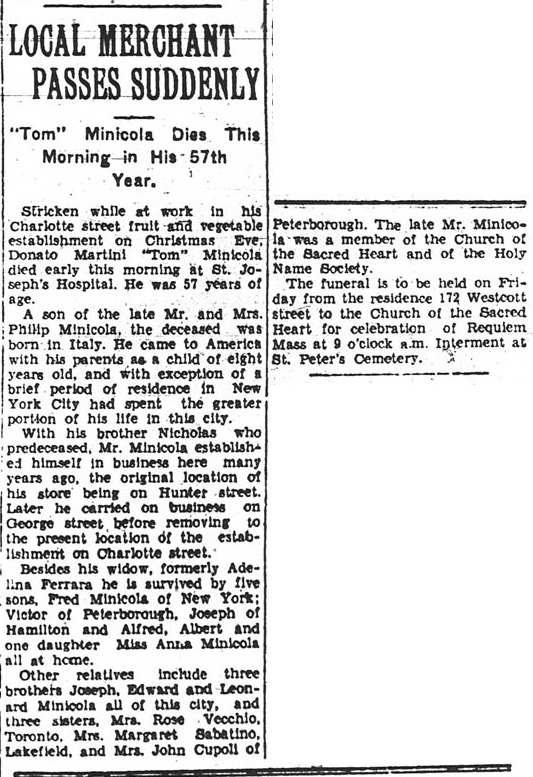 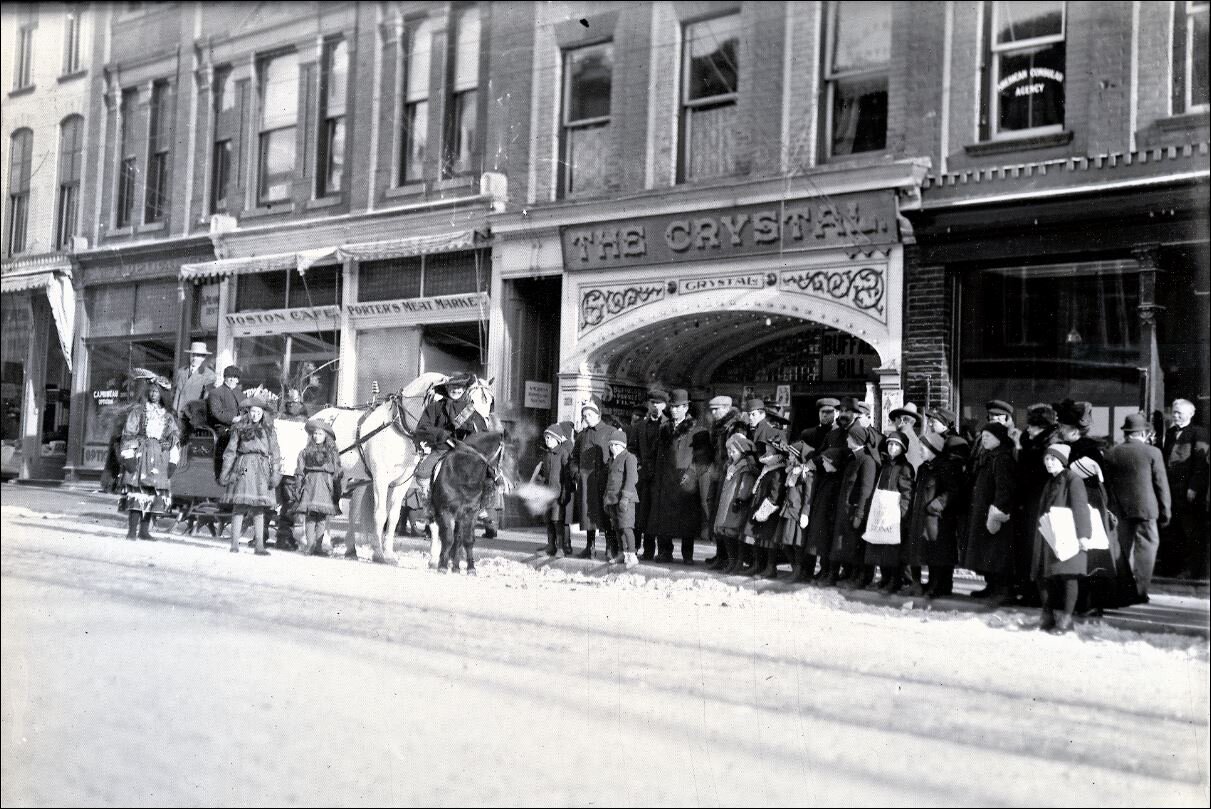 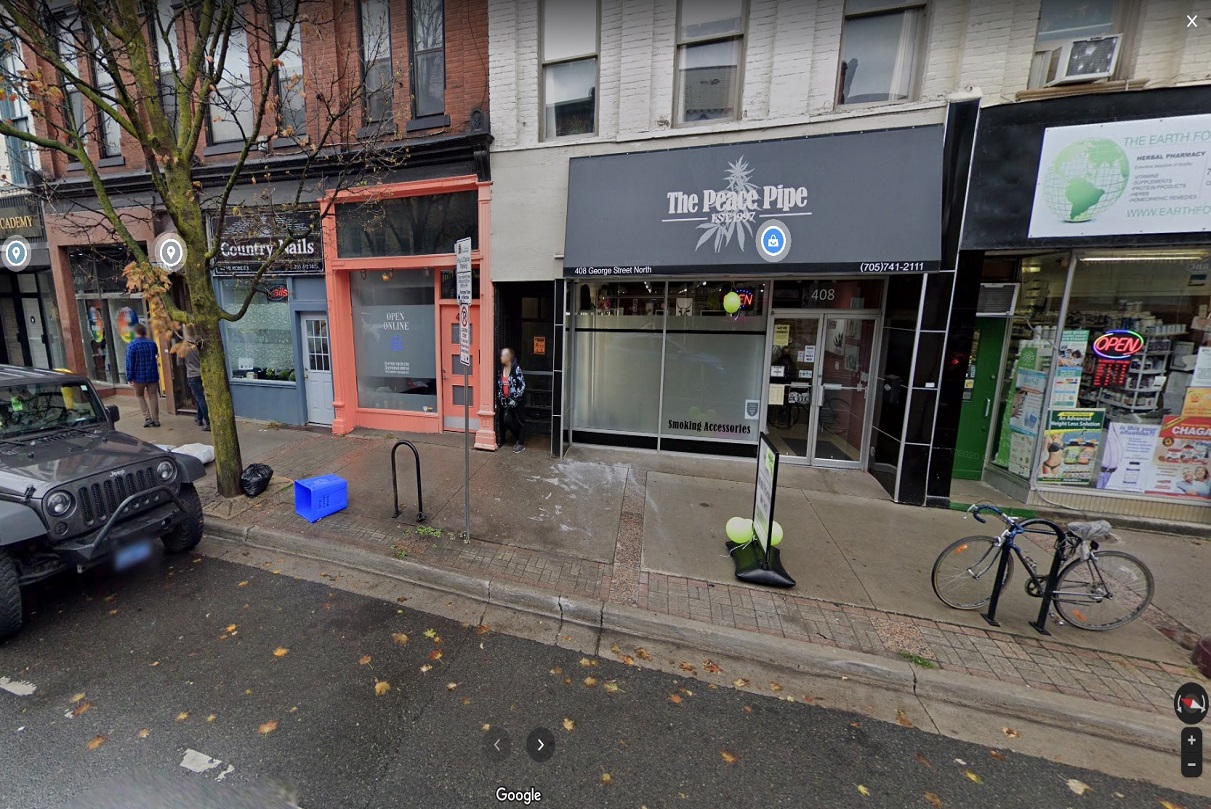 Now & Then: At left – 410 1/2 George Street in 1910, a year before D M Minicolo Fruit & Grocery opened at the former Boston Cafe storefront, and on the right 109 years later in 2019. Country Nails is now at 410 1/2 George Street where the Grocery store was located between 1911 and 1930. The Crystal Theater is now The Peace Pipe. Use the slider to compare views. 1910 photo credit to The Peterborough Museum and Archives (PMA), Balsillie Collection of Roy Studio Images, 1978-012-40A-44. Thanks to Robert Clarke https://www.peterboroughmoviehistory.com/the-theatres/the-crystalred-millstrand 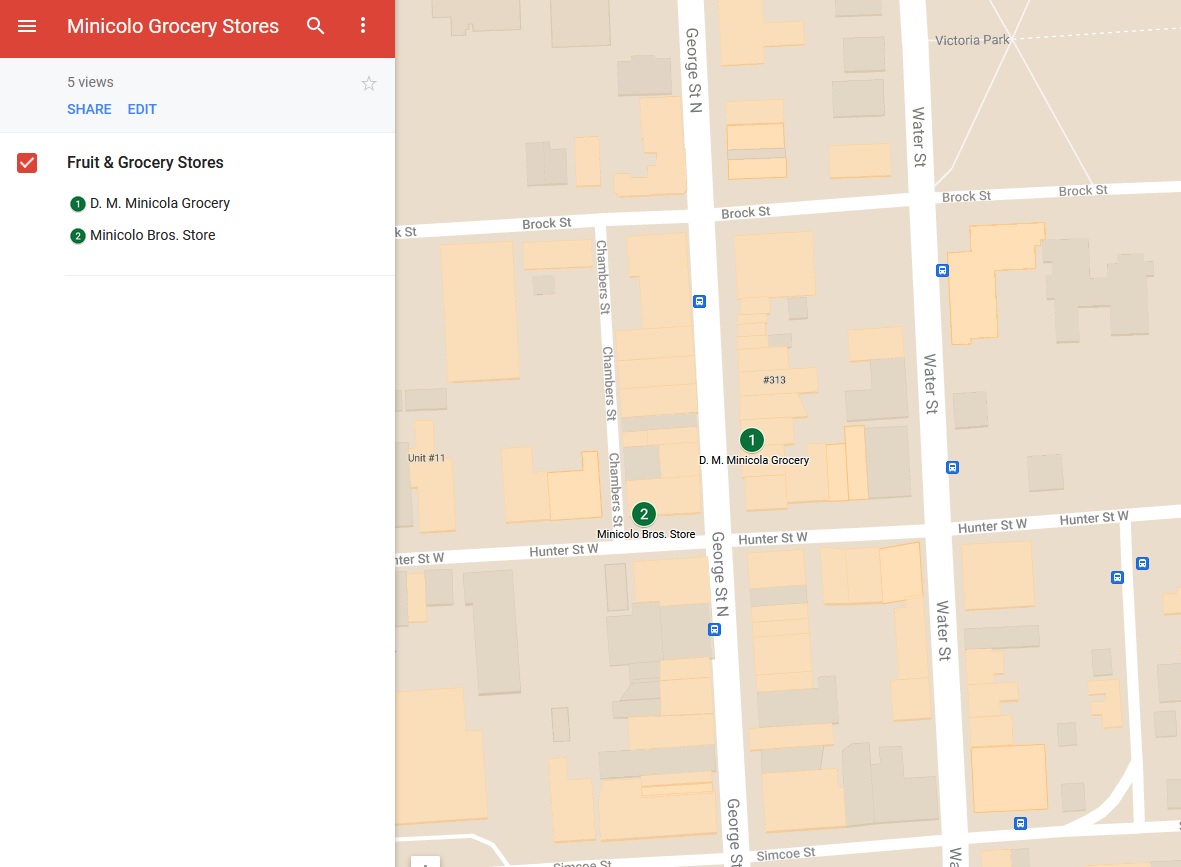 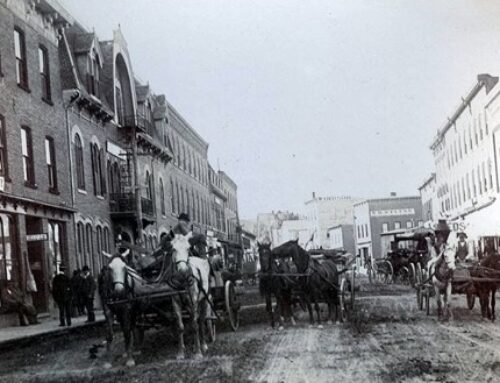 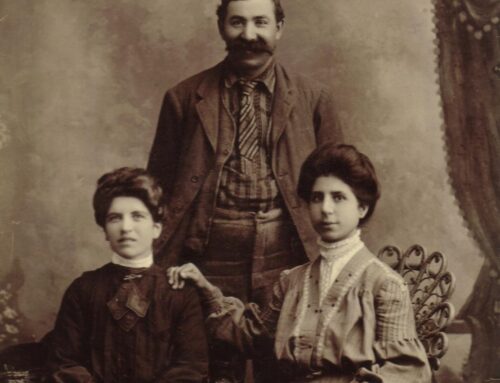 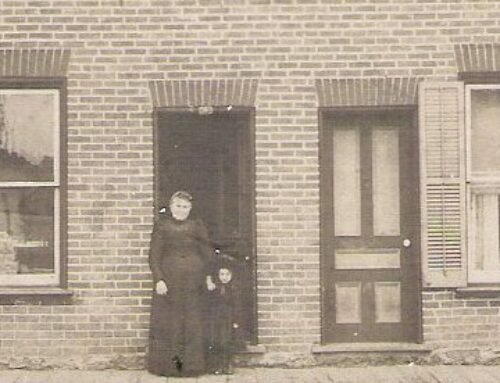 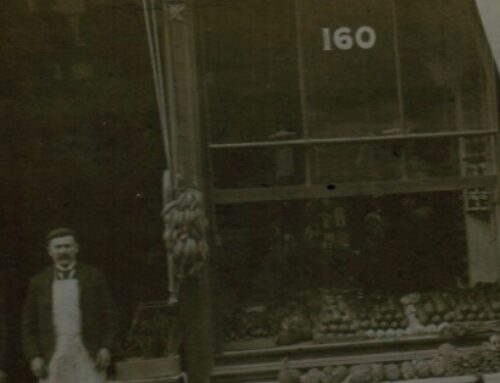