The Peel family’s roots go back to England, Scotland and Ireland. John Joseph Christopher Peel was born in 1892 in England and immigrated to Canada around 1909. In June of 1914 he married Kathleen Waters in Peterborough, Ontario where they settled and raised their family. The Waters family immigrated from Ireland in the early 1800’s and settled in northern Hastings County. They moved to Peterborough after the death of Kathleen’s father, Michael Waters. John served his country in the Great War (WW1) and was injured numerous times during his service including at the Battle of the Somme. Each time he recovered and was sent back to the front. Thankfully he survived the war and returned to his young family in Peterborough where he then worked at the Canadian General Electric Company as did his son Jack, my grandfather.

The Easton family immigrated from Scotland in 1820 and settled in the area of Caldwell’s Mills near Clyde Forks, Ontario in Lanark County. William Easton moved his family to Peterborough around 1930. The Sweeney family immigrated from County Kerry, Ireland in the 1840’s and settled in Darling Township, Lanark County. William Easton and Mary Catherine Sweeney are buried in the cemetery at Clyde Forks Click here for more information

Click here for online version of the Peel/Easton Family Tree 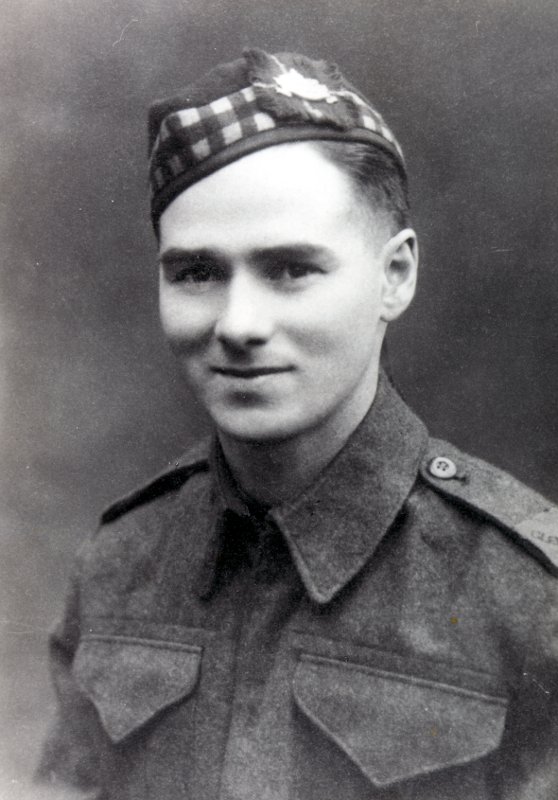 Jack Peel
John Reginald (Jack ) Peel circa 1940. C53151 served with the Stormont, Dundas and Glengarry Highlanders – they were part of the invasion force on Juno beach, June 6th, 1944 (D-Day) and fought across Europe eventually liberating The Netherlands. He served his country from 1940 – 1945.

The Stormont, Dundas and Glengarry Highlanders were mobilized in June 1940 to guard the St. Lawrence Seaway. The Regiment absorbed companies from the Princess of Wales’ Own Regiment and the Brockville Rifles to form an overseas battalion that went to England in 1941 as part of the 9th (Highland) Brigade, 3rd Canadian Infantry Division.

The SD&G Highlanders landed in Normandy on D-Day as part of the 3rd Canadian Infantry Division and were the first regiment to enter Caen, reaching the center of the city at 1300 hours, July 9, 1944. The SD&G Highlanders took part in many brutal battles across Europe: Orne (Buron), Bourguebus Ridge, Faubourg de Vaucelles, Falaise (Falaise Gap), The Laison, Chambois, Boulogne 1944, The Scheldt, Savojaards Plaat, Breskens Pocket, The Rhineland, Wall Flats, The Hochwald, The Rhine, Zutphen and Leer.

At dawn on May 3, 1945, German marine-units launched an attack on two forward companies of the SD&G Highlanders, occupying the village of Rorichum, near Oldersum, that was the final action during the war, VE Day found the SD&G Highlanders near Emden.